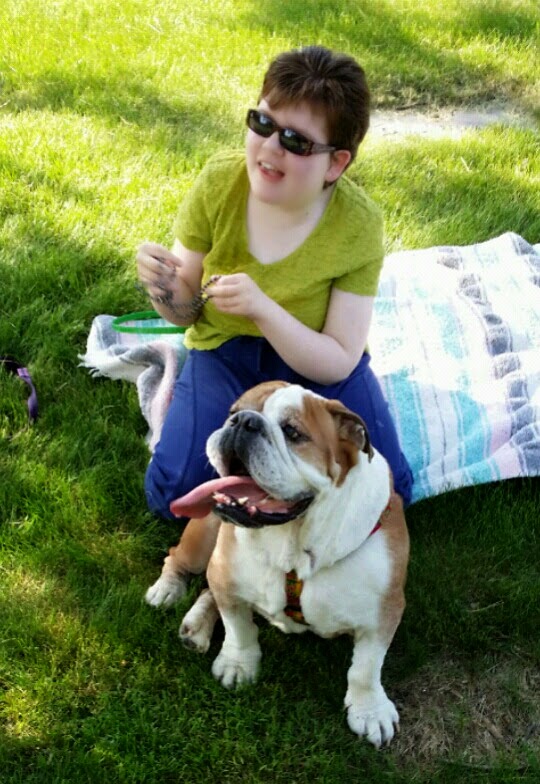 Hi :-) My name is MichaelAnn Elizabeth Byrne.  I go by MichaelAnn and do not have a nickname (though my parents sometimes call me “pumpkin pie”).

I was born on in and have been a world traveler since.  I lived in until I was about 10 months old and then moved to so Papa could go back to school.  When I was 2 ½ (June 1999), we moved to .  Papa got a good job here and we are also closer to family now.

Besides seeing most of (including Keiko [the whale in Free Willy] before he moved to ), I have been to , , (one of my doctors is here),  and .  I have ridden on a plane more times than I can remember but it has been awhile.  I am a good traveler.

I developed pretty typically until about one year of age, and then I wasn’t meeting those darn developmental milestones.  I started early intervention when I was 14 months old in .  When I was 16 months old, I was admitted to the hospital (the first of seven) with what the doctor described as “coma”.  It wasn’t until the 3rd hospitalization that they did an EEG and realized I was having status seizures.   Now my seizures are better controlled and I haven’t been hospitalized for a status seizure since April 1999. (See the seizure section under the Health & Safety page for information on my seizures.)

I went through a battery of tests, evaluations and seen numerous specialists to see if we could find a reason for the seizures and delays.  Nothing could ever be found medically.  I was diagnosed with epilepsy and mental retardation.

The gene for Rett Syndrome was discovered in September of 1999. I had my blood drawn to see if I had the MeCP2 mutation.  My test came back negative for the mutation but Rett Syndrome can be also be diagnosed by the fulfillment of diagnostic criteria, which I met.  I was diagnosed January 2000 with Rett Syndrome.

I took my first independent steps in May 1999 and started walking (even though I fell a lot) in July 1999.  I lost most of the communication skills I had.  I quit playing with toys between 1 ½ and 2 years of age.  The repetitive hand movements probably started when I was 1 ½.  I would spend a lot of time looking at the back of my hand; my family called it “looking at my diamonds”.  They are so silly, I didn’t have any diamonds onJ  I started the hand washing/wringing sometime around the beginning of 1999 and the hand mouthing towards the end of 1999.  I have a very difficult time keeping them out of my mouth.

I can get “stuck” in this repetitive behavior and not be able to focus on anything else.  I have elbow splints that I can wear and this helps me focus on other things.

Music is really important to me!  I have my own stereo, tapes & CD’s and MP3 players.  I love to listen to my music.  We found out that music is loved by many of the girls with Rett Syndrome and can be very therapeutic.  I started music therapy in September 2001.  It has helped me break through some apraxia (motor planning problems), communicate my wants better as well as tons of other things.  The toys I do play with are musical.

I discovered the rides at and had so much fun on the bigger rides.  I’m going to try and talk my papa into taking me there every week or find myself a buddy to take me (my mama doesn’t like the rides).  I haven't gone for awhile, a lot of times it is just too hot out for me to go but I would like to go more oftern.

I’m not very good with the heat.  I can overheat rather quickly because I do not sweat adequately.  I am really limited  with  my time outside in the summer.  It is important that you help me monitor this because I can get unresponsive in a very short period of time due to being overheated.  I will first get red and this is the time to cool me off.  Bring me inside where it is cool or use the mister I have to help me cool off.

I keep learning and discovering new things every day.  I’m glad you are in my life to give me the opportunity to learn new and fun things.  So, let’s have fun and experience life!

Gosh, how time flies!  I'm in the 11th grade and will be 18 in a week, officially an adult (shhh, don't tell mom she doesn't like it that I'm growing up).

Pretty much about everything on this page is still true except for the diagnosis of Rett Syndrome and walking.  As I said before I never tested positive for the Rett gene and that I had the diagnosis based on diagnostic criteria.  I still have the characteristics of Rett Syndrome but a few years back I had an MRI of my brain and they found that I had excessive iron on it.  I was then given another diagnosis of Neurodegeneration with Brain Iron Accumulation (NBIA) but again I never tested positive for any of the known NBIA disorders.

In late 2012 a new gene was discovered, Beta-Propellor Protein Associated Neurodegeneration (BPAN) and I tested positive for this gene.  It is a new NBIA disorder and currently less than 50 people in the world are diagnosed with it.  You can find out more about it under my links.  They also discovered similarities between Rett Syndrome and BPAN. The doctors said I had a lot to do with them discovering the links!

I also stopped walking sometime around the age of 13.  It can happen but I do miss walking and moving when I wanted to.  I use a wheelchair now and need help with getting around in it.

Don't get caught up in my diagnoses, they are not who I am.  I am an awesome human being who enjoys having fun, being a fashionista, designing & making jewelry (I'm taking a jewelry class in high school which I LOVE!) and of course, making new friends.  If you have to opportunity to say "hi!" please do so and take the time to get to know me.  If I do say so myself, I'm FaBuLoUs!!!!